Clint Smith is a Marine Corps veteran of two infantry and Combined Action Platoon tours in Vietnam. His experience includes seven years as a police officer during which he served as head of the Firearms Training Division as well as being a S.W.A.T. member and precision rifleman.

He left law enforcement to serve as Operations Officer for the American Pistol Institute where he was Dean of instruction and was instrumental in range and curriculum development for A.P 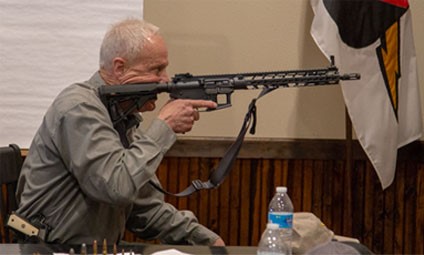 In 1986, he served as Director of Training for Heckler & Koch, Inc., where he developed and taught progressive courses in fully automatic weapons as well as conventional weapons systems. 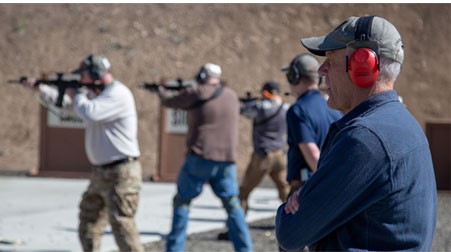 In 1993, Thunder Ranch, Inc. opened to show not only innovative training, but numerous range designs and functions of a type not seen before in one facility. Clint is a contributor to American Handgunner, American Cop, GUNS and SWAT magazines and has published articles in many other national and in international publications. In 2004, TR was successfully moved to Oregon.

Heidi was born and raised in the Seattle area. From an early age hunting and fishing were a part of her life due to her father owning Chilanko Lodge, a Hunting and Fishing Lodge in Interior BC Canada.

Her first handgun course was in 1989. Soon after this she obtained her concealed carry permit. After attending several handgun and rifle courses she along with her mother saw that there was a need in the industry to have an all-female format to introduce women into learning how to shoot and use handguns and rifles.

This began officially with The Personal Safety Institute. A non-profit organization all lady firearms training team dedicated to teaching women the safe and responsible ownership of firearms. It was one of the very first of its kind on the west coast.

PSI operated and trained hundreds of ladies for 7 years during the 90’s. Also during this time she attended the WA State Criminal Justice Association and became a WA State firearms instructor. In 1992 she became an adjunct instructor for International Training Consultants (ITC).

In 2009 she became an EMT for the State of Oregon and helped create the current Trauma Block that is taught at Thunder Ranch. Starting in 2010 she was sworn in as a Lake Country Sheriff’s Reserve deputy and is currently a TEMS medic for the Dept.

“Our primary concern is that people who come to Thunder Ranch leave with a peace of mind in their heart and head. We strongly hope that they never have to use any of the skills or things learned here for the defense of themselves or their family, but if they do, we want this knowledge to be used confidently and with great vigor. The only goal is to win.” ~Heidi Smith